Skip to navigationSkip to contentSkip to footer

This article is sponsored by Helloworld Stockland Nowra

We were stumped – or should I say, ‘stomped’?

We needed to set up our campsite but there was a problem that we were unprepared for, despite my husband and I being a couple of travel professionals with forty years experience in the industry.

It was the first afternoon of our camping trip deep in Morami Game Reserve. Situated in the Khwai area, we were surrounded by rolling wilderness of green lush vegetation, towering palm trees and a lovely chorus of chirpy birds singing to us.

Unfortunately, right in front of us and where we needed to set up shop, a young bull elephant was enjoying some afternoon tea, munching on fallen marula fruit.

He stood around four metres high, and the little guy was unperturbed by the sight of us. We were spellbound. 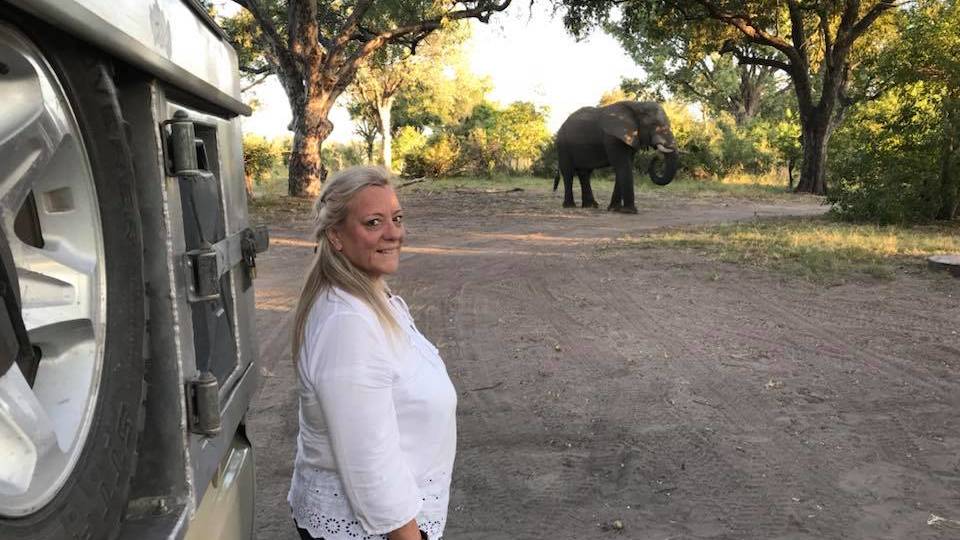 A young bull elephant enjoys some afternoon tea... on the area where we are to set up camp.

We didn’t want to rush him – aside from the mammoth indigestion we might cause, we also could have been witness to quite the elephant tantrum. So we waited for the magnificent beast to finish and wander on.

We’d had a very early start and arrived in Maun, the gateway to the Delta and Moremi Wildlife Reserve.

We’d changed into open-sided 4x4 vehicles straight out of the movies and arrived in Moremi in time for lunch. Then we’d continued on to Khwai, a village on the north bank of the Khwai River in north-west Botswana.

The village has a population of approximately 400 BaBukakhwe or River Bushmen. Archaeological evidence suggests that many Basarwa groups have been living in Botswana for at least 22,000 years, but it is not known when the Babukakhwae identity coalesced and when they became attached to the Khwai floodplain. 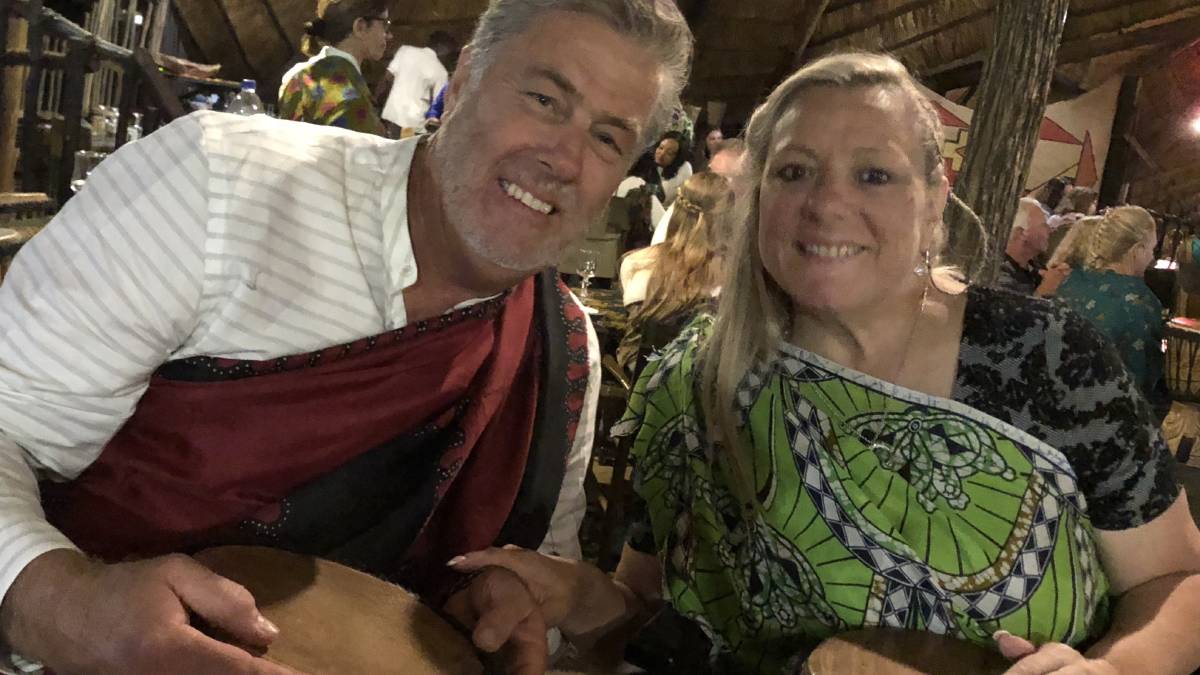 Time for a song and dance.

After exploring the reserve in our safari vehicles excited by sightings of hippos, giraffes, impala, zebra, wildebeest and a couple of roaming young male lions we returned to our full prepared private campsite. We were inside the Moremi Reserve and we also assembled makeshift bush showers and toilets.

They seemed fine – not luxury by any means, but practical enough to serve their purpose. At least that’s how we felt when the sun was up and people were abundant.

But when nature called after sundown, it was quite another experience.

Who would have thought a simple trip to the bathroom would become so experiential? We were surrounded by the rich lush fragrance of flora cooling off for the evening while hyenas sang merrily in the background. 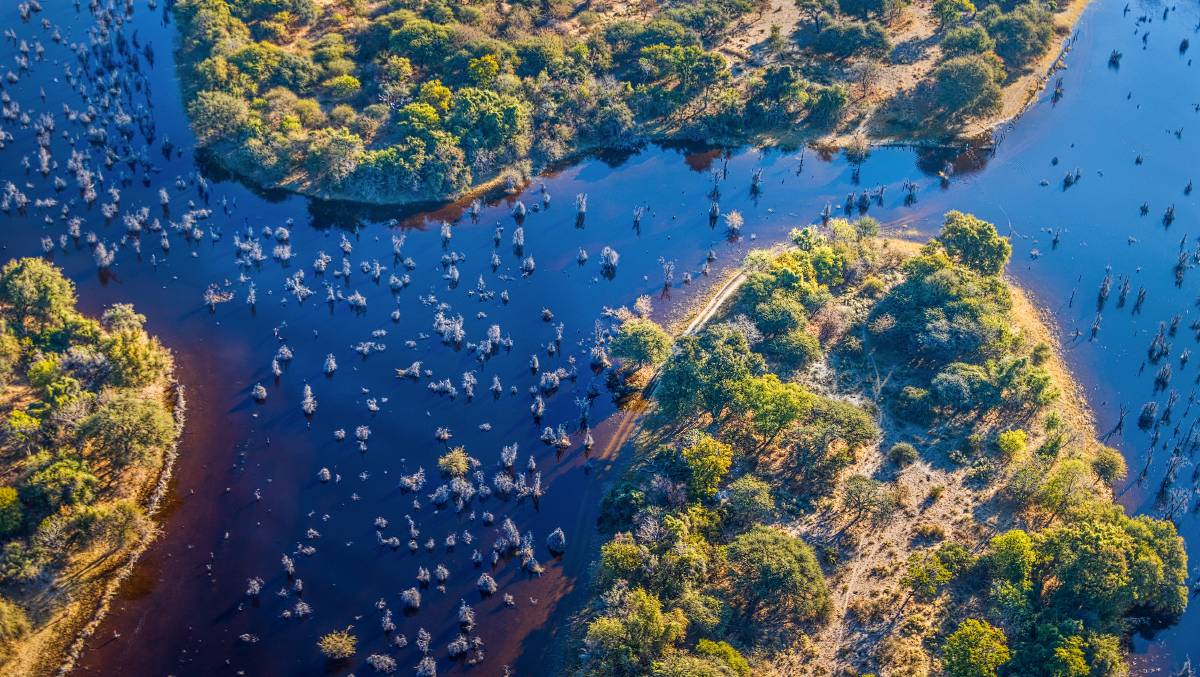 It’s a humbling experience – at once you feel vulnerable and connected to the land. Our home, millions of years ago, was waiting all along for us to return.

The next morning we journeyed onto Mokoro to explore the Okavango Delta. The Okavango Delta is one of Africa's last remaining great wildlife habitat and provides refuge to huge concentrations of game. 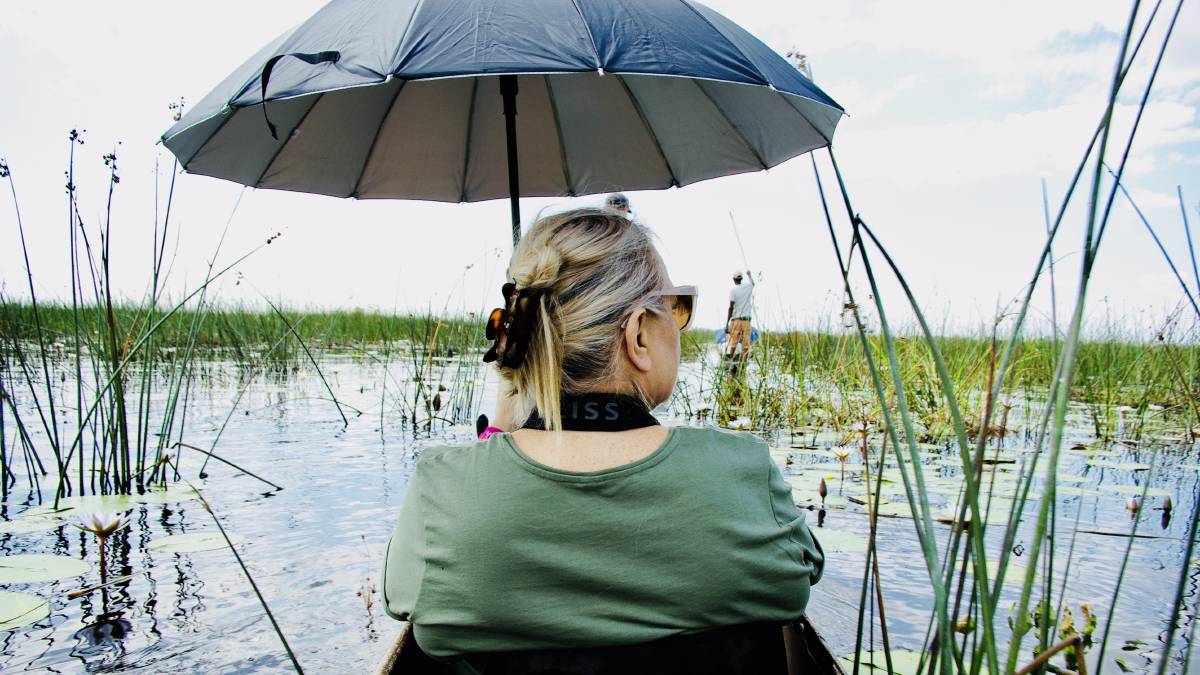 Cruising on a mokoro on the Okavengo Delta.

We were at the mercy of the water levels – if they are too high, the boat journey from the Mokoro boat station can go from exhilarating to nerve-wracking.

Luckily we had our own mokoro poler, a local boatman who guided us through the swamp waters with ease, offering us pearls of wisdom and knowledge about our surrounds. It was a peaceful experience, gliding through the water, taking it all in.

It was onto Kasane next, where we set up camp on the banks of the Chobe River. We were excited: the area is known for the great elephant concentrations that occur on the river during the dry season. African Elephants swimming across the Chobe River, Botswana with tourists on safari watching on

It’s a life-giving river, teeming with birdlife and the occasional big cat sighting too. We enjoyed a ruby-red sunset across the still waters from a game-viewing boat cruise.

The fading landscape of the Chobe River being consumed by the starry night sky reminded us that we are only a small part of something much larger.

There is a bigness about Africa that gets under your skin, invigorates your senses while at the same time reminding you of your connection to the land. Morning light at Victoria Falls from Zambia looking into Zimbabwe.

We travelled across the Zimbabwe border to see Victoria Falls – Mosi-oa-Tunya, or The Smoke That Thunders.

It’s truly one of the greatest waterfalls in the world – a force upon itself. Rushing water gives way to the inevitable gravitational pull with spectacular gusto, leaving us spellbound.

Victoria Falls is the only waterfall in the seven natural wonders of the world as decided by the Seven Natural Wonders (CNN) organisation. We spent the day leisurely enjoying the patchwork of local market stalls, teeming with colour and intrigue. Kind locals with generous smiles tempted us with their beautifully-made wares, showcasing the skill and art of the Zimbabweans.

We travelled back to Botswana with bursting pockets and set up camp at Nata. The village lies along the Nata River, which carries its rainy season flow to the Makgadikgadi Pans, a seasonal hypersaline lake.

Travelling south, we made our way to the Tuli area, rich in ancient archaeological heritage. There were San rock sites all around us, alongside Stone Age era discoveries. It’s a work in progress – scattered artefacts are still being discovered throughout the reserve, which is unfenced to protect natural migratory patterns. We set up camp on the Limpopo River for the evening. 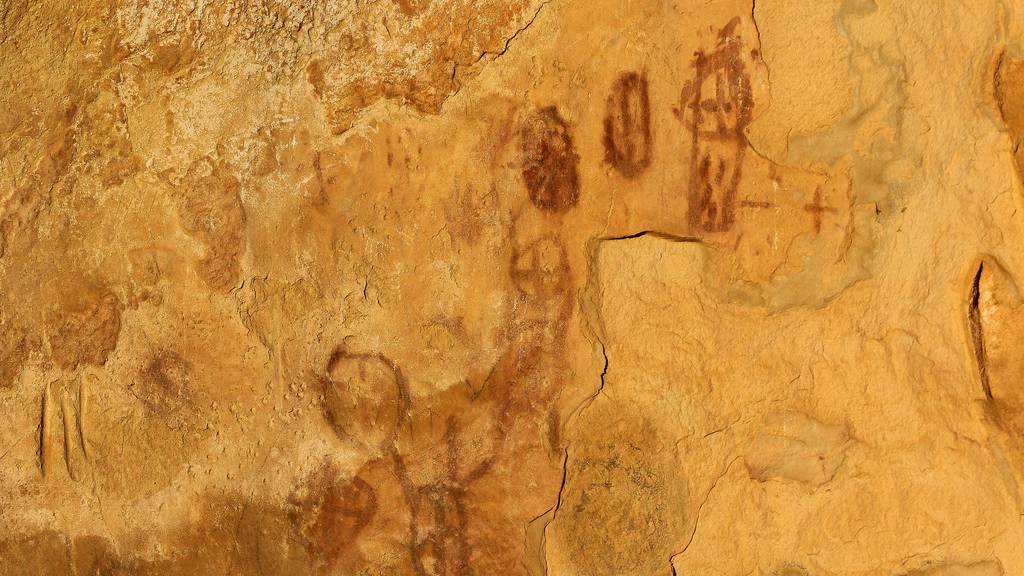 As the sun sets on another incredible day in Botswana, we felt lucky. The remains of an ancient 6,500-kilometre lake glistened beneath the dying sun casting golden tones across the land. Somewhere, nearby, an animal roared – or was it a yawn? Time for bed.

Time to retire to the land. To rest on our original home, the ancient, welcoming landscape of Africa.

It calls you to return and we cant wait to go back. Join us in September next year for another adventure through Botswana. It’s a fully serviced adventure – no cooking, cleaning or lugging campsites.

The 16-day Botswana Adventure offered by Helloworld Stockland Nowra starts at just $5,350 per person, twin share, flights and taxes included. Save $200 per person when you book before October 31.

This article is sponsored by Helloworld Stockland Nowra

No thanks, I’m keeping my ad blocker on